Report-back from the 2022 NDWA Congress and 15th Anniversary Celebration

2022 marks NDWA’s 15th anniversary! Thanks to the hard work, vision and dedication of thousands of domestic workers like you, our alliance has been growing in numbers and in power since 2007. Together, we are winning rights and dignity for domestic workers and advancing toward a more just economy and democracy for us all. On September 16-18, 150 representatives of NDWA’s Affiliate Organizations and Chapters, members of our national Worker Councils and our Board of Directors travelled to Washington DC to mark the occasion. In addition, more than 1,000 domestic workers participated via livestream from all around the country! We are happy to share these highlights of the weekend. Please pass them on to other domestic workers in your community.

On September 16th, the 32 members of our National Worker Councils met for a day of planning and discussion on how we can push for improvements to domestic work jobs through Federal government agencies like the Department of Labor. The Nanny, Homecare and Housecleaners Councils also each elected their representatives to serve on the NDWA Board of Directors, bringing the unique perspective of each industry to the table. Meanwhile, the Platform Workers Council discussed strategies for ensuring that domestic jobs posted on online platforms are fair, decent jobs. NDWA’s four Worker Councils are democratically elected worker leaders with many years of experience in their fields and a track record of local leadership. Together, they represent all of the workers in their respective industries and serve as strategic advisors to guide NDWA’s work.

Later that evening, domestic workers and our supporters celebrated 15 years of building domestic worker power! We presented awards to two of NDWA’s founding leaders Antonia Peña and Barbara Young, one of the founding members of We Dream in Black, Patricia Sauls, gig worker leader Iyesha Alston, NDWA Deputy Director Mariana Viturro and longtime supporter of our movement Richard Winsten. We recalled some of the highlights of our movement’s history by watching a brand-new 15th anniversary video. If you haven’t seen it yet, you can watch and share it here. We celebrated and honored all who have built this movement. Including YOU!

Over the next two days, we held the 2022 NDWA National Congress. Two delegates from each NDWA Affiliate Organization and Chapter, plus our elected Worker Council and Board members, rolled up our sleeves to strategize and chart a path forward for our alliance. We assessed the impacts of our core strategies like winning Domestic Workers Bills of Rights, enforcing our rights and building new forms of collective worker voice. We shared reflections and new ideas of how to make these strategies even more effective. We identified ways we can coordinate better as a national network of powerful local organizations. And we discussed our national campaign priorities, reflecting on what we’ve been able to win together and setting our sights on even more ambitious gains in the upcoming years.

Throughout the weekend, domestic worker leaders got us fired up, energized and inspired! And we were joined by leaders from allied movements who shared their perspectives on the current political and economic landscape, and on the roles that NDWA is uniquely suited to play.

Finally, we engaged in one of the most important practices of building a worker-led movement: the election of domestic workers to serve on NDWA’s Board of Directors. NDWA’s Board is composed of four representatives from our Affiliate Organizations and Chapters, three representatives from our Worker Councils, three allies and one staff representative. At the Congress, we held a candidates’ forum where worker leaders running for election made eloquent and impassioned speeches about their vision for our movement and desire to serve on the Board. Then our Chapters and Affiliates voted to elect the organizations and worker leaders who will serve on the Board for the next two years.

Every day, our collective voice grows stronger! Whether you were in the room, participating via livestream, or are getting these updates now for the first time, we want you to know that you were appreciated at the Congress and celebration for all that you do to make the domestic worker movement a powerful force! 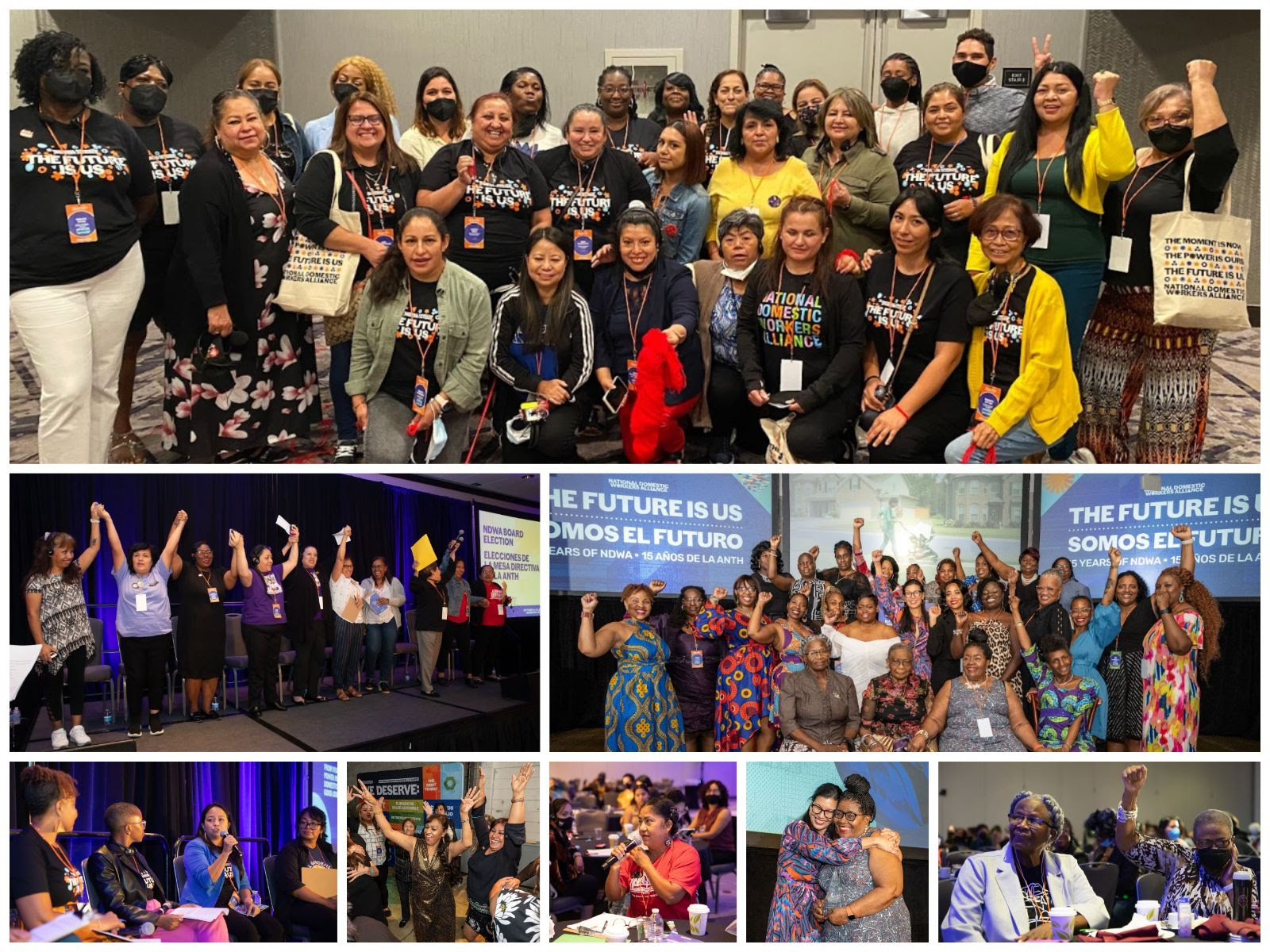